The jury of the prestigious Gramophone Classical Music Awards has announced Paavo Järvi and the Frankfurt Radio Symphony as the winner of this year’s Orchestral Award for their recording of the complete symphonies of Franz Schmidt. 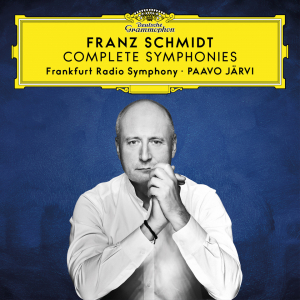 Released last Autumn on Deutsche Grammophon, the recording received world-wide acclaim and Gramophone chose it as Recording of the Month, commenting “these are compelling, supremely persuasive performances that constantly underline the music’s great qualities.”

Paavo Järvi said “Performing and recording the Franz Schmidt symphonies was a total labour of love – on many levels. First of all, it was music that was introduced to me by my father. I fell in love with these pieces because of him and because he was so incredibly enthusiastic about this music. Also this set was the last project I worked on as Chief Conductor of the Frankfurt Radio Symphony – and it was a very special conclusion to my time with the orchestra. For those reasons these recordings have a unique significance for me and I am thrilled to be receiving this Gramophone Award.”

“Paavo shares plenty of his father’s virtues in these works” said Gramophone “not least an apparently instinctive ability to draw Schmidt’s symphonic threads together into performances that are persuasive, powerful and, thanks here to the rich-sounding Frankfurt Radio Symphony Orchestra, very well played to boot. But the new set boasts its own qualities … an unfailing musicality, an extra sense of refinement, a seriousness that never spills over into portentousness, an ability to let Schmidt’s ideas unfurl naturally.”